The Iowa Central Transportation-CDL was given the honor of delivering the newly-created Floyd of Rosedale monument to its home in Fort Dodge.

Iowa Central, with the help of Jim Kersten, was a key factor in the development of the project through the eyes of Fort Dodge City Councilman Dave Flattery.

The governors of Iowa and Minnesota came to an agreement back in the 1930s to award the winning team in the rivalry with a hog. The first was one selected from AR Loomis’ Rosedale Farms, which was presented to the Minnesota governor and named Floyd.

The trophy has been awarded since 1936, making it one of the longest-running trophy games in college football.

The Floyd of Rosedale monument is located at 10th Avenue North and 32nd Street. That is close to the original site of the Rosedale farm where the original Floyd lived. 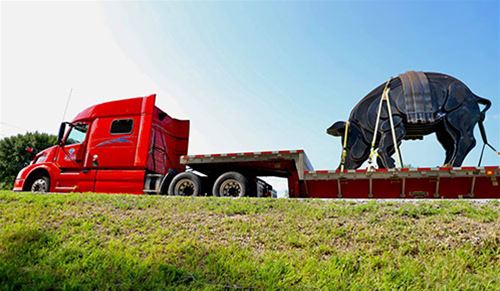 I chose Iowa Central because both of my parents came here and absolutely loved the environment. I was able to be a part of so many programs at once which isn't offered at other colleges. I knew right away after visiting that it would be a great school where I could better myself as a student and as an athlete.