Manson native overjoyed to be on the stage again


Emma Anderson couldn’t describe her excitement to be part of the upcoming Iowa Central play on any normal scale.

No, the Manson native had another number.

“If I was measuring my excitement on a scale of 1-to-10, I’d probably be somewhere around four billion,” Anderson said. “I’m so glad I get to sing and perform. I, unfortunately, didn’t get to have a musical during my senior year of high school, and we obviously couldn’t have one last year, so I’m keeping my hopes up for this musical to make up for those missed opportunities.”

Anderson, who is also part of the Iowa Central Concert Choir, will play the role of the small-town mayor in Who’s Dying to be a Millionaire.

Getting through her first year of college while experiencing a pandemic has only helped Anderson grow.

“It was really hard for me,” she said. “I struggled a lot with the online classes and the zoom calls, but I’m thankful now that I can get a real college experience from this semester without all the hassle and panic.”

From taking part in church events as a youngster through high school, where she was involved in drama and speech, Anderson says she always “put myself in there.”

“I played roles such as The Evil Stepmother, Snoopy, the Genie in Aladdin and an eccentric swordsman for my high school plays and musicals,” Anderson said. “I also got to go to All-State for high school speech, for radio broadcasting, One-Act Play, spontaneous speaking and review.”

At Iowa Central now, Anderson is taking it all in and learning under Teresa Jackson, who will direct the musical.

“Honestly, getting to be in Mrs. Jackson’s classes has just been a joy and an honor,” Anderson said. “I’ve learned so much and she fosters a great and fun learning environment. Her acting classes are the best.”

Who’s Dying to be a Millionaire will take place October 6-9 at Decker Auditorium on the Iowa Central campus. 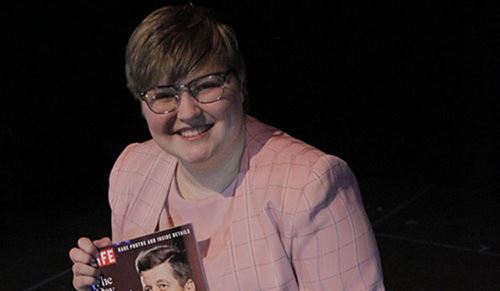 I chose Iowa Central because of the amazing opportunities and teachers. When I came to visit, I fell in love with the teachers in my program of study.