Hammel: 'One way or another, we are all connected'


Dominic Hammel will be a busy person during the upcoming performances for Iowa Central’s show Who’s Dying to be a Millionaire.

Along with his role as a stagehand, the Dubuque native has provided his assistance in building and handling the technology aspect of the event.

Forty Iowa Central students, under the direction of Teresa Jackson, will put on several shows inside Decker Auditorium October 6-9.

Hammel’s first love for the fine arts started in middle school when he was cast in musicals.

“I also helped out the stage crew and helped build sets,” he said. “I quickly fell in love with stage crew and all throughout high school, I went to every single set day as well as being in the cast for the plays and musicals.”

While navigating through the pandemic during his first year at Iowa Central, Hammel was able to still embrace his passion.

“Some of the best memories from Iowa Central within the arts are helping with finding props and furniture for every character in the play last year. Also watching it come all together was really a sight to behold. It really makes you realize that one way or another, we are all connected somehow.”

He has jumped right in this year, saying he has been “crawling underneath the levels to connect them together, to building the doorways and walls for the set. I have had so much fun so far.”

Hammel is also involved in Concert Choir, Vocal Jazz and Encore singers, along with being a Student Ambassador, an RA and part of the eSports program. 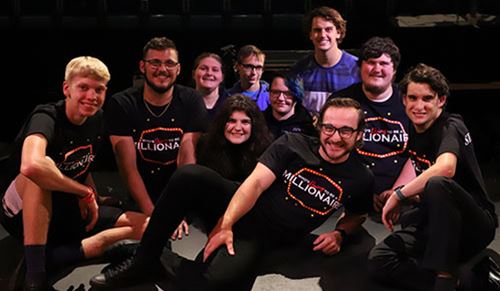