Ambassador Terry Branstad visited with Iowa Central Community College students and faculty on Tuesday while in Fort Dodge helping with the unveiling of the Floyd of Rosedale Memorial.

Branstad, the longest serving Governor in American history, most recently held the title of United States Ambassador to China during the presidency of Donald Trump.

“I was appointed on the first day President Trump was in office,” Branstad said. “It was a great honor to be (in China). I was proud to work with American companies and Americans while there.”

From 1983-1999, Branstad was the Governor of Iowa. He returned to that office in 2011 and served until 2017 when he joined the Trump administration. Branstad’s son, Eric, led the campaign in Iowa that helped get Trump elected to office as the state director.

Branstad also served three terms in the Iowa House of Representatives, the President of Des Moines University and the Chair of the National Governors Association.

The Leland, Iowa native graduated from both the University of Iowa and Drake University. He also served in the United States Army with the 503rd Military Police Battalion.

Iowa Central President Dr. Jesse Ulrich introduced Branstad along with Jim Kersten, who serves as Vice President of External Relations and Government Affairs at the college.

Branstad concluded the speaking engagement by answering questions from the Iowa Central students and faculty in attendance. 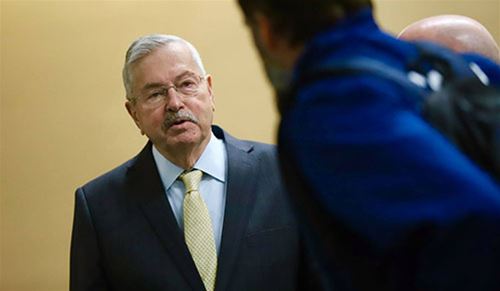 I got recommended for the robotics program from someone I know that took the same program. So I took a campus visit and I was very impressed.