Iowa Central Sounds of the Season


The talented musicians at Iowa Central will return to the stage for their annual Sounds of the Season concerts beginning in December.

On December 9 and 10 at 7 p.m. the Iowa Central Concert Band, Triton Singers, Jazz Combo, Encore Singers, Triton Kids, Pop Voices and Vocal Jazz will be joined by soloists, guest musicians and more to get you in that holiday spirit from inside Decker Auditorium.

Led by Will Lopes and Paul Bloomquist, the two-night event will allow the audience to interact through the sounds coming from the voices and instruments of those on stage.

“Come ready to sing along, laugh and celebrate this beautiful season,” said Lopes, the Director of Vocal Music at the school. “We are excited to share another musical partnership between the Concert Band and Triton Singers, along with having Triton Kids back, featuring them in some of the pieces.

“Encore Singers, as always, won’t disappoint with their exciting and uplifting set.”

Familiar names such as Jack Hannon, Karl King and Leroy Anderson will also be presented, along with a special segment from the memorable Robin Hood film.

“There will be a variety of styles in display,” said Bloomquist, the Director of Instrumental Music at Iowa Central. “Jack Hannon will be featured on the trombone playing a traditional concerto with band accompaniment. Karl King is on the program with one of his graceful aerial waltzes called ‘Mystic Night.’ A celebration fanfare from the Robin Hood movie starring Kevin Costner will honor one of our own Iowa Central faculty members.

“A non-typical Leroy Anderson composition that includes a horse and whip, but is not ‘Sleigh Ride.’ The jazz band will feature many soloists on both traditional and non-traditional holiday tunes.”

As is the norm around the holiday season, there will also be a special time for reflection.

Lopes added that “in a year filled with loss, we will also take a moment to remember and celebrate those who have made major contributions to our program and community.”

Along with the incredible music, the audience is invited to join Iowa Central President Dr. Jesse Ulrich and performers in an annual reception with holiday treat following Thursday’s performance.

The Iowa Central Visual Arts department also has an art gallery on display for all to view. 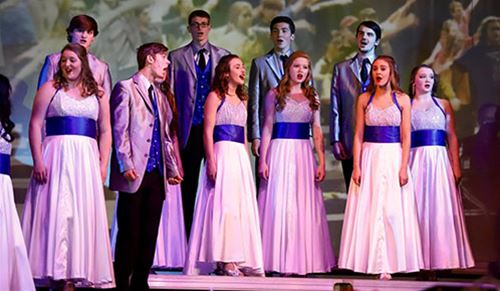