Dominic Gliko was honored as the class speaker during the recent University of Iowa College of Nursing Commencement Ceremony.

Gliko, a native of Billings, Montana, graduated from Iowa Central Community College in Storm Lake in 2017 before attending Iowa. He earned his Associate of Applied Science in Nursing from the school and currently works as a clinic nurse in the psychiatric outpatient clinic at the Nebraska Medical Center.

After graduating from Billings West High School in Billings, Montana, Gliko earned his diploma in practical nursing in 2016 and an Associate of Applied Science in Nursing a year later from Iowa Central.

“Iowa Central clearly played a vital role in not only my academic success but also in my professional goals,” he said. “I can't thank Carrie Kephart and Amy Schmidt enough for giving me the tools to build a solid nursing foundation that has taken me further towards achieving my academic ambitions. Had I not had this experience, I very likely wouldn't be where I am today.

“So for that, I am so incredibly grateful to have had to opportunity to start my journey at Iowa Central.”

Gliko, who also serves as a staff nurse in the psychiatric emergency services unit at Nebraska Medical Center, is an active volunteer with the American Foundation for Suicide Prevention Out of the Darkness Walks and has spent many years volunteering with the Yellowstone AIDS Project.

“Dominic is passionate about mental health and actively applies his mental health knowledge in his course assignments,” said College of Nursing Associate Dean for Undergraduate Programs Anita Nicholson, Ph.D., RN. “In his Global Health Community practicum, he and his classmates developed a proposal of mental health interventions that will be implemented in the future with youth in the small southern African country of Eswatini.”

Gliko was selected as the speaker due to his positivity, leadership and active engagement in his nursing classes.

“At first, I was just in such a state of shock from thinking about speaking in front of so many people, that the weight of it hadn't really sunk in,” Gliko said. “Of course, I felt immensely honored, who wouldn't be? But the gravity finally took hold as I began to write my speech. I realized at that moment, that I have this incredible opportunity to speak on behalf of nontraditional students, gender minorities within my profession, distance learners, and considering the state of the pandemic - healthcare professionals that simultaneously worked while completing levels of higher education.”

The ceremony was held in Iowa City at the Hancher Auditorium on the University of Iowa campus. A total of 125 graduates were honored during the event.

Gliko is applying to enter the University of Nebraska Medical Center’s BSN-DNP psychiatric nurse practitioner program in fall 2022. His future plans also include continuing working with Nebraska Medicine while completing his DNP degree with hopes to practice there as an advanced practice registered nurse.

“As all nurses should say, they chose this career path because they want to help people,” Gliko said. “Which is also very much the same drive that directed my career path. However, I had no interest or desire to practice outside of psychiatry and mental health. I have always been an extremely empathetic person, and value the importance of motivational problem-solving. Having a nursing background not only allows me to practice therapeutic communication but also promotes holistic care. My career thus far has been extremely challenging but even more so rewarding. 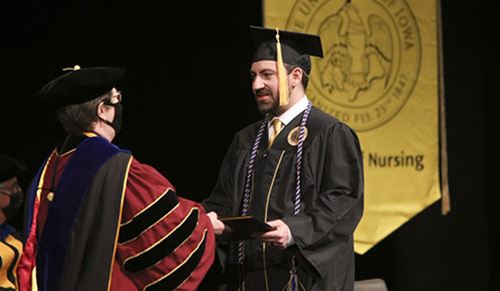