Jeter, the head football coach at Simpson College, played for the Tritons under Vern Thompson from 1994-95. He was named a team captain for the Tritons and earned all-region honors before transferring to Simpson, graduating with his B.A. in physical education in 1998.

But it was not always a clear and focused path for Jeter. After receiving a full-ride scholarship to the University of South Dakota, he was left searching and questioning things.

“I lost my scholarship because of academics,” Jeter said. “My mindset at that time was totally different, and I am just so thankful that I was given a second chance by Coach Thompson and Iowa Central.

“I knew with that second chance, I couldn’t let it go. I had to buckle down, go to class and use all of the student resources available to me to grind it out and turn the tides.”

That is exactly what Jeter was able to do, and what he expressed to the students in attendance.

“It was a dark time for me after losing my scholarship,” he said. “But it was a short time. I didn’t want to wait too long to make a decision and a few former teammates in high school were at Iowa Central.

“For me, it’s about learning from my mistake. I don’t want these kids to have to go through what I went through. I had several come up to me after and tell me they are right where I was. I told them to stop digging themselves a hole. That’s the key. You have all the resources you need to succeed at Iowa Central and people there want to see you succeed.”

From there, Jeter entered into his coaching career with stops at Des Moines Lincoln High School, Drake University, the University of Central Missouri and finally back home to lead the Storm in 2016.

“The campus looks totally different from when I was there,” Jeter said. “But it was great being back on campus, connecting with the students and coaches.”

Jeter was brought to Iowa Central as part of Black History Month. He delivered a speech that centered around a standard of excellence in everything you do including academics, athletics and social life.

“The students were engaged throughout and I believe were genuinely interested in my story and message,” Jeter said. “I felt the event was well attended and will only continue to grow in the years ahead.”

Jeter became the first Black head football coach at a university school in the state of Iowa upon his hiring. He was named the American Rivers Conference Coach of the Year in 2018. 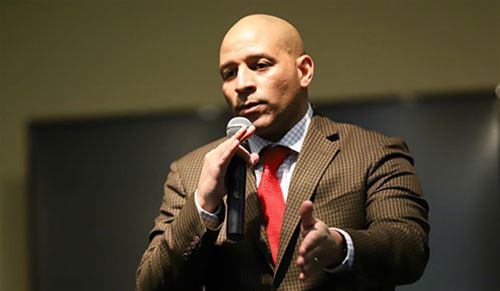