The Iowa Central music department will go under the sea, presenting The Little Mermaid to fans in March.

Under the direction of Teresa Jackson, the cast will return to the big stage after a year away due to COVID-19. The last spring musical was in 2019-20 and Newsies.

The Little Mermaid opens March 2 with a 9 a.m. matinee for school children and retirement communities. Evening performances are scheduled March 3-5 inside Decker Auditorium and tickets are now on sale.

“I love so many elements of this show, one of which is its many universal elements,” Jackson said. “A young man and woman struggling to understand their place within their families while also trying to pursue their own dreams.

“It’s about breaking down barriers of those who fear and misunderstand each other, of taking risks and facing evil with bravery and dignity.”

The original story was written by Hans Christian Andersen and turned into an animated classic by Disney. The stage adaption of the story includes music by Alan Menken, lyrics by Howard Ashman and Glenn Slater, and book by Doug Wright containing all of the movie's beloved songs and moments from the original film, while also deepening the core relationships and themes by adding more layers.

“As a director, I always appreciate scripts which offer variety, and this show has it all,” Jackson said. “I’ve always found that when performers are having fun, audience members vicariously join in. I find myself pausing at times to simply savor the moments when I hear the laughter of our students echoing in the rehearsal spaces of Decker Auditorium.

“It’s like we missed out on a year of that laughter, and it’s all the sweeter now for its return.”

Tickets may be purchased through the Iowa Central Bookstore, online or by calling (515) 574-1081. 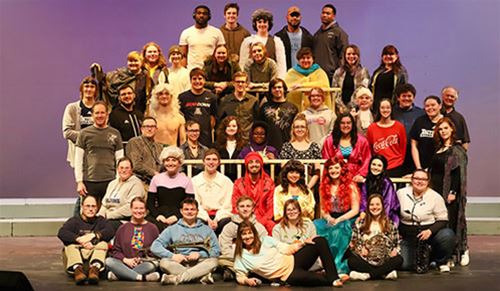