Members of the Iowa Central Culinary Arts program took part in the recent Student Taste of Elegance Competition. The event was held in Ankeny at the Iowa Culinary Institute.

Three teams of students were entered from Iowa Central with Avery Bardole, Viatris Scott, Sarah Sundene and Kristine Frideres on one, Audrey Cmelik, Sayid Almendarez, Jordyn Whitson and Joshua Saw on another and Trevor Schueneman, Lucas Alstott, Eliazer Lozano and Gavin Plagman on the third.

“I am very proud of how they prepared for the competition and how they performed on the day to claim top spots in the competition,” said Chef Geoffrey Phillipson, Associate Culinary Instructor at Iowa Central. “They all worked in a very professional manner.

Team one created a dish of pork kebab with peppers and onions served on a garlic flatbread with pickled vegetable salad and a cilantro-lime yoghurt sauce. The second team was responsible for pork, garlic and ginger meatballs with shitake mushroom dumplings, green onions, radishes, roasted mushroom and sesame broth with soy tuille.

Contestants prepared the main entree utilizing ground pork. The entree needed to be accompanied by two side dishes to compliment or at least be a complete plate that could be served in a restaurant setting.

“They were given the freedom to create garnishes and other components to make the dish as delicious and eye-appealing as possible,” Phillipson said. “They were asked to cook and plate the dish once or twice to be sure they were happy with everything prior to going to the competition.” 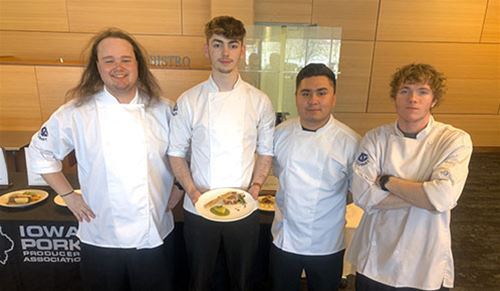