The Iowa Central Spring Showcase will hit the stage inside Decker Auditorium in April.

The three-day event begins on April 20 with a matinee performance at 2 p.m. Thursday, April 21 and Friday, April 22 will be evening events starting at 7 p.m. on the Fort Dodge campus. Admission is free for all to attend.

Titled “A Musical Journey,” the showcase will bring together the Iowa Central music department under one roof including all of the vocal and instrumental ensembles: concert band, Triton singers, encore singers, jazz band, PopVoices and Vocal jazz.

For the students set to take the stage, the chance to perform in front of a live audience is what they are most looking forward to.

“I’m most excited to perform the ‘In The Heights’ set with encore,” Sophie Showalter said. “I love the challenge and the opportunity to represent other cultures.”

Madison Nicks added, “I’m most excited for the full auditorium. Seeing people fill Decker after a year of no-shows is amazing.”

And for Madi Mashmann, this is a chance to “learn and experience all the different types of music we’re doing, and getting to share that experience with the audience.”

The concert choir will be performing a piece titled “Celbbrai,” which was written by Iowa Central’s own Will Lopes, the Director of Music. There will also be a time of reflection to honor those that have experienced music through a new set of eyes due to the COVID pandemic.

Paul Bloomquist, Director of Instrumental Music at Iowa Central, said, “The audience can expect a musical journey through various cultural styles and geographic locations” during the event.

“The concert is the culmination of all the ensembles’ work throughout the entire year,” Bloomquist said. “It’s not the individual songs as much as the process of getting to each other as people and musicians.

“They really are a group that started the year as a bunch of individuals, but now, they are a collective unit of players that want to help each other succeed in life as well as the music.”

It will be a special series of performances as they will be the final ones inside the legendary Decker Auditorium before renovations on the concert hall begin. In the coming months, the program will travel to various local venues, churches, schools and theaters for performances.

“Fort Dodge is so supportive of the arts and has so many different programs,” Lopes said. “We are excited to explore all the different venues within the next year that we will be performing.” 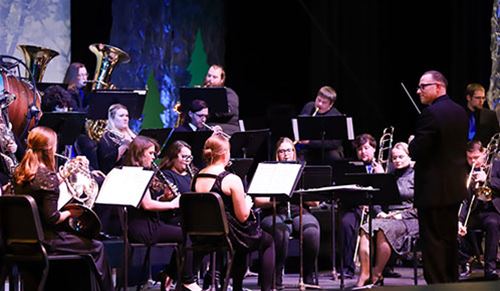