LeJuan Miller admits that getting going each morning was a struggle early on.

But once he found himself involved in the business program classes at Iowa Central Community College, the Kansas City native was excited.

“Now that I know I am taking classes that will help me in my future career, I’m enjoying them a lot more,” Miller said. “It feels like I’m working towards my career instead of just filling the time. That’s also helped my transition go more smoothly.”

Miller, who is part of the football team at Iowa Central, is in his first year at the school. He plans to return in the fall and continue his progress towards a four-year university.

“(The business program) has opened me to a variety of future possibilities,” Miller said. “This Intro to Management class has helped me a lot.

“I just feel a sense of motivation to want to come and learn. I feel like I have a sense of more on the line that if i miss a class, what I am actually missing could really hurt me moving forward, so I don’t want to miss anything.”

Once done with school, Miller wants to own his own business so that he has “control over the big decisions and the small ones.”

“I want to be the one making the tough decisions,” he said. “These classes have helped prepare me to be able to know the ins and outs of being a manager. (David Barwin) tells us that you have to ‘know how to follow before you can lead,’ so I am learning how to do just that.

“Iowa Central has really helped me. It has opened my eyes to different points of view from all different backgrounds.”

Jesse Jenkins comes from a deep family rooted in the business world.

The Illinois native enrolled at Iowa Central Community College so that he could follow in the footsteps of those family members.

“My dad owns a business back home and I’ve always looked at what that offers as a positive and want to do the same,” Jenkins said. “I’ve always wanted to do it and it seems like it would be a great way to make a career.”

Jenkins credits his instructors, including David Barwin, with the proper motivation.

“I came to school wanting just to become a ‘businessman,’” Jenkins said. “But Barwin, he has motivated me in a good way to want to earn a business major and keep going with my school.

“I didn’t do very well my freshman year and had a really good chat with Barwin about it. He explained what I could do and needed to do, and that’s what I did.”

After that “heart-to-heart,” Jenkins returned a new student.

“I came back the next semester and have been doing great,” he said. “I’m just more motivated and feel more locked in. (Barwin) told me that if business is what I want to do, it starts here. I can’t move forward if I’m stuck in neutral.

“He makes me want to learn outside of class and has made it all very interesting because he’s honest and has a fun personality that makes him easy to get along with.”

Jenkins has his sights set on becoming an owner of a car dealership in the future.

Camron Winninger knew what he wanted to do before graduating from Fort Dodge Senior High.

Winninger has only continued to grow closer to his career goal through his work with the business program at Iowa Central Community College.

“From a young age, I knew I wanted to become a car salesman,” Winninger said. “Taking classes at Iowa Central has helped me gain knowledge in the economics of sales for cars. It’s always been my passion and I believe if you are passionate about something, you should go for it.”

Winninger feels the freedom and teaching of his instructors has made the transition from high school to college much easier.

“It’s gone pretty smooth for me,” he said. “I felt pretty comfortable ahead of time, but being here has made me more comfortable talking with people.”

Winninger, who has worked for the past three years at Fareway Stores in Fort Dodge, is planning to either continue his education here or transfer to Storm Lake to be closer to family.

“Between handling customers at Fareway and through the teachings of David Barwin, I’ve gained more knowledge and feel ready,” he said. “Mr. Barwin does a great job explaining and guiding us through activities in class to give us a better understanding.” 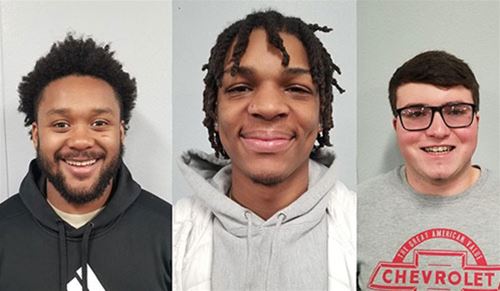