Vocalists with the Iowa Central Performing Arts Department are busy in preparation for their upcoming season of concerts.

The 55 members of the Triton Singers Concert  Choir, which also includes students involved in the select ensembles of the Encore Singers, Vocal Jazz and Pop Voices gathered for an afternoon of rehearsals and activities recently to gear up for the year, and their first concert of the season, ‘Sacred Sounds.’

The choir’s annual retreat and media day is the kick-off to a year of performances to be held both on campus and around the community throughout the 2022-2023 year. The Sacred Sounds concert is set for Friday, Sept. 30.

“This is our one day of intensive rehearsals and learning,” said Will Lopes, Iowa Central’s director of vocal music. “It’s a time where we really get to know each other and really get into the music and get to know all of the pieces for our concert.”

One highlight will be the Concert Choir’s closing number, “This is My Word,” which will feature the 55-voice chorus along with a group of community singers who will join the musicians on stage.

Lopes said the concert will close with a beautiful rendition of the Bill Withers tune “Lovely Day,” performed by the Encore Singers.

Following the tradition of holding the first concert of the year in  the community, Sacred Sounds will take place at First Presbyterian Church, 1111 Fifth Ave. N. in Fort Dodge. The concert will begin at 7 p.m. Admission is free. 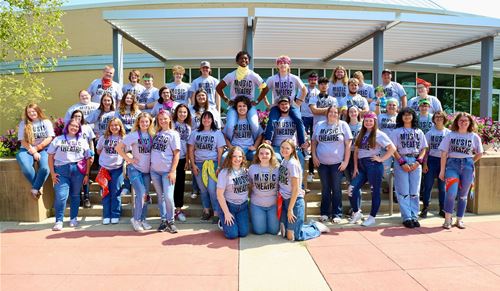 I love having a home away from home with all the friendships I have created.