Culinary Students Give Back Through Community Thanksgiving


Students in the Culinary Arts Program at Iowa Central Community College are gearing up for their largest hands-on assignment of the year: preparing a meal for nearly 2,000 people while also giving back to the Fort Dodge Community.

Since 2009, the Culinary Students, under the direction of Culinary Arts and Hospitality Management Program Coordinator Chef Michael Hirst, have been partnering with local auto dealership Fort Dodge Ford Lincoln Toyota to prepare a free Thanksgiving dinner. The partnership with Iowa Central began when Fort Dodge Ford owners Casey and Deb Johnson and their family decided to host a dinner in the showroom of their dealership but knew that such a large-scale event would require more resources and labor than the four of them could provide solely on their own.

“We knew we wanted to have Thanksgiving dinner in the showroom, but we also knew that would require some different sources to make it happen,” said Casey Johnson. “That’s where we brought Chef Michael and the culinary students on board.”

The students prepared and served a traditional Thanksgiving meal for around 250-300 people that first year, and it has grown significantly each year since its inception, according to Hirst.

“We started this 14 years ago and we were and are happy to do it,” said Hirst.  “We knew then that it had the potential to become something big and it has grown exponentially every year.”

In the weeks leading up to Thanksgiving, culinary students will begin prepping nearly 1,600 pounds of turkey, with every piece going into the meal.

“We start with the turkey, we roast them, debone them and from that we get about 500 to 600 gallons of turkey stock from scratch that we use to make dressing and gravy,” said Hirst.

In addition to turkey, students will prepare a homemade traditional English sausage dressing from more than 300 pounds of bread, over 650 pounds of corn, green beans and brussels sprouts, 450 pounds of potatoes and 900 servings of homemade pie complete with 64 quarts of fresh whipped cream.

Iowa Central does not hold classes the week of Thanksgiving, but Hirst expects that many of his students will volunteer their time to remain on campus during the week to prepare and serve the meal.

“When everyone else goes home, these students will stay and put in around 30 hours of volunteer time per student,” said Hirst.

On Thanksgiving Day, kitchen work begins at 6 a.m. as Hirst, culinary students and an army of Iowa Central volunteers prepare approximately 800 meals to be delivered to those who cannot attend the meal at the dealership.

“The Iowa Central Family comes together on Thanksgiving to help make the whole operation happen,” said Hirst. “Everyone from employees and their families to our athletes, they all show up to help out and many hands make for light work.”

Hirst and Johnson expect an additional 700-900 meals will be served at the dealership on Thanksgiving.

The meal is the largest in Fort Dodge and is expected to fulfill an even greater need this year as food prices increase and other local programs have been discontinued.

“We will serve close to 2,000 total meals this year,” said Hirst. “We probably have one of the largest community Thanksgiving dinners in Iowa. Everything is homemade from scratch, just like if it were a meal at home.”

Johnson said the partnership provides an opportunity for both organizations to give back to the community, and also a real-world learning experience for the culinary students.

“This is the single largest amount of food these students will prepare for anything,” he said. “It gives them the experience of what it takes to feed 2,000 people on one given day.”

Hirst said at the end of the day, when the meal is prepared and served, the greatest reward is seeing everyone come together to dine as a community.

“What started as a way to feed people in need has grown,” said Hirst. “We’ve created a unique family atmosphere that has become a great community gathering, really a celebration of Fort Dodge. When we come together there is no hierarchy here, we all sit down to dine together.” 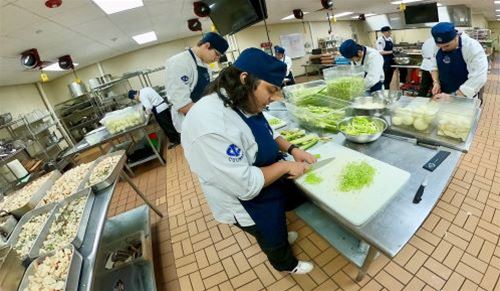 At Iowa Central the professors focus on the success of the students, and with small class sizes it makes interaction with the professors easier. You are not just some random number in a class at Iowa Central. The teachers are always available and can respond to any question you may have in a timely manner.