When Nicholas Kurtz first came to Iowa Central Community College as a student, theater wasn’t on his radar.

Kurtz, a Storm Lake native, was a Division I prospect in track and field until he was sidelined by an ankle injury his senior year of high school. At that time, Kurtz said he knew his college career was going to be different than envisioned. He chose Iowa Central at the recommendation of his brother, Jake, who also attended Iowa Central.

“When I knew I wasn’t going to be an athlete; I wasn’t heading for a big university,” said Kurtz, who spoke to Teresa Jackson’s acting classes Friday morning, January 13. “My brother had gone here and had gotten a lot of the same experiences of a 4-year school at Iowa Central.”

Kurtz said he hadn’t been at Iowa Central long when “fate intervened.”

“I had zero speech or acting experience before coming to Iowa Central,” he said. “I wanted to run track in college. When I was injured, I wondered ‘what am I going to do now?’”

He took an acting class with Jackson, and a friend convinced him to attend a fall play audition.

Kurtz was cast in several supporting roles in the 2005 Fall Play “Epic Proportions.” It was in this production that he discovered his love for acting. He transferred to the University of Iowa in 2006, where he studied theater.

“There’s just something about this,” Kurtz said of acting and performing. “It gets you.”

Upon graduating from the University of Iowa, Kurtz decided to forgo furthering his theater education at an Ivy League School. He returned home to Storm Lake and worked various jobs. Still, pursuing an acting career in Los Angeles was never far from the back of his mind.

“I knew I wanted to do it (move to L.A.),” he said. “But I wasn’t sure how I was going to get there, so I worked construction jobs and saved up some money.”

Kurtz told the classes that along the way, he met plenty of people in Iowa who did not take his professional acting dreams seriously. He never let that hinder his goal of making it to Los Angeles.

“People told me ‘There’s no way,’ they all told me I couldn’t do it,” he said. “No one understands why you do it (acting), but I stuck with it. I never let go of my dream.”

In December 2012, Kurtz and his girlfriend packed up and headed for California to pursue that dream.

Kurtz took a job as a bartender and started submitting for auditions, landing a spot and winning on an episode of the gameshow “Wheel of Fortune” in the process.

He sold himself as an actor with his real-world work experience and told the students that is one of the best ways to get a foot in the door as a professional actor.

“That real experience is what they are looking for,” said Kurtz. “I worked construction in Iowa and that got me into a Bosch Tools commercial. Then I became a spokesperson for Skilsaw Tools. I did Shakespeare at (The University of) Iowa, I never thought I would ever be a tools spokesperson.”

Kurtz let the athletes in the audience know, that if acting is something they are interested in pursuing, their athleticism is a helpful tool for landing jobs.

“I did triathlons for 10 years,” he said. “That experience got me into cycling commercials. It’s your basic experiences that can get you jobs.”

Kurtz said that being from Iowa has its advantages in the film industry.

“Producers know, we have experience, we have work ethic, we are nice. Your life experience in Iowa sets you apart. It may seem silly, all that weird stuff you might do here in Iowa but it’s worth a lot.”

Kurtz has appeared in a Super Bowl commercial with actress Charlize Theron, as well as had roles in the movies “Never Forgotten” and “The Sac Fly” and the series “Animal Planet Presents.”

After 10 years in Los Angeles, Kurtz is still grateful for his beginnings at Iowa Central.

“I got from Fort Dodge to L.A., and that is one of the coolest things you can do,” he said. “And you can start that right here at Iowa Central.” 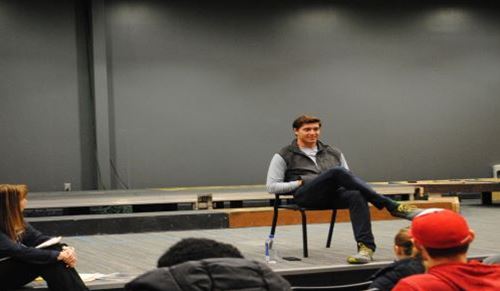 The coaches inspire me every day, not just to be a good dancer, but to be a better person, teammate, captain, and student. I wouldn't want to be anywhere else other than Iowa Central.